Thank you for your cooperation and support of prof. Kiotaki for writing this article.

Some paintings create abnormal motion illusions. Prof. Akyoshy Kiotaki determines the mental state of the human perception through optical, or how exactly the brain perceives certain shapes and colors as dynamic or static images. On his site http://www.ritsumei.ac.jp/~akitaoka/index-e.html he warns that some of the pictures can cause dizziness or might possibly evoke epileptic seizures. The latter happens when the brain cannot handle the conflicting information from your both eyes. If you start feeling unwell while using this website, cover immediately one eye with your hand, then leave the page. Do not close your eyes as this can make the attack worse!

Akiyoshi Kitaoka is a Professor of Psychology at the College of Letters, Ritsumeikan University, Kyoto, Japan. He obtained his Bachelor’s degree from the Department of Biology, University of Tsukuba at Tsukuba, Japan.

After his 1991 PhD at the Institute of Psychology, University of Tsukuba,[1] he specialized visual perception and visual illusions of geometrical shapes, brightness, color, in motion illusions and other visual phenomena, such as Gestalt completion and perceptual transparency based on a modern conception Gestalt Psychology.[2]

Optical illusion (also called ‘visual illusion’) is an error in the visual perception caused by the inaccuracy or inadequacy of the process of unconscious adjustment of a visual image. There are three main types of optical illusions:

The concept of the Peripheral Drift Illusion (PDI) refers to a motion illusion generated by the presentation of a saw-tooth luminance grating in the visual periphery.

All images in this collection are static images rather than animation. The psychologist Akiyoshi Kitaoka creates images called ‘visual illusions’ based on the modern concept of Gestalt psychology. 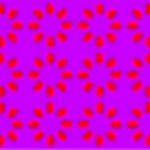 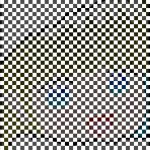 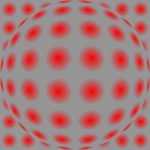 The image appears to scintillate.

The left heart is constantly white and the right one is yellow. If the observer fixes his/her eyes at the cross in the middle, the two parts of the image will swap.

An interesting effect found by Troksler

Visual illusions can help you learn more about yourself and how the brain of a person works. The perception of paintings and the outside world indicate the mental state of a human.

Cover slowly one of your eyes. Watch the image from a distance of 6-12 inches. Fix your open eye at the cross in the center of the picture. Do not move your sight away but watch the cross for a few seconds instead, while remaining still. Then you will see that the violet stain will disappear. If you get stuck, use a cord enlarged image. This phenomenon occurs only in the area of the peripheral vision.